Flutter And Wink Your Way To Any Of These Falsies Lashes

We’ve all done silly things when we’re not wearing our glasses! Having trouble sticking lashes on without her glasses.. turns out she was trying to glue a dead fly to her eyelid! If you’re lucky enough to have 20/20 vision, consider yourself lucky; it probably means that you don’t regularly find yourself in embarrassing situations when you’re not wearing your glasses.

When those with impaired vision get caught without glasses, things tend to become quite blurry, and it becomes easy to get mixed up when things are similar colours, sizes, or shapes.

Things that involve precision are especially difficult, and this includes putting on makeup.

Glasses wearers will know how difficult it can be to put on makeup both with and without glasses – with, because they’re in the way, and without, well, because you can’t see a thing!

One poor mum found this out the hard way when she was attempting to get dolled up, and unfortunately for her, her beauty blunder has gone viral after her daughter posted it to Twitter!

Molly Robbins’ mum, Judy, was attempting to go the extra mile with her look and apply false eyelashes, only to realise, no doubt in absolute horror, that without her glasses on she had accidentally picked up a dead fly instead of the false lashes!

Yes, she was attempting to glue a dead fly to her eye. 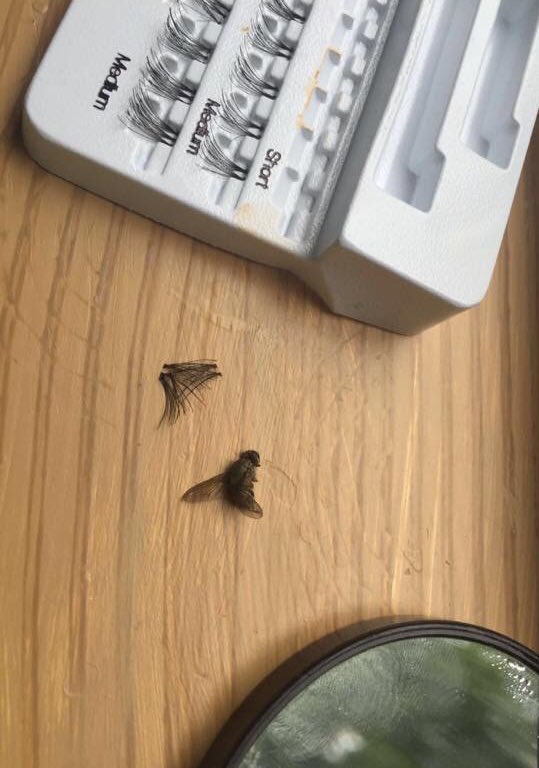 Text from mum – having trouble sticking lashes on without her glasses.. turns out she was trying to glue a dead fly to her eyelid. I’m out. pic.twitter.com/2vNpcW5l5n

Of course, Twitter users had some fun at the expense of the traumatised mum, and some of their responses were hilarious!
Some were horrified and disgusted:

And others had some “helpful” suggestions to get the fly to stick next time:

OMG!!!!!!!! I bet superglue would have worked. Tell her to try a stronger glue

All we can suggest is that Judy may want to invest in a pair of those glasses where you can flip one lens up to do your eye makeup, or perhaps a monocle.

Or, it might be a good idea to vacuum and dust so that she can be certain no dead flies are lurking where they shouldn’t be.

What’s the silliest thing you’ve ever done when you’ve been caught without your specs? Click here  for PROPER Step-by-step Guide On How To Put On False Lashes!

What Everybody Ought To Learn about Appeal